A double star system has been flipping between two alter egos, according to observations with Chandra X-ray Observatory and The Karl G. Jansky Very Large Array(VLA). Using nearly a decade and a half worth of Chandra data, researchers noticed that a stellar duo behaved like one type of object before switching its identity … Read more

After counting all the normal, luminous matter in the obvious places of the universe (galaxies, clusters of galaxies and the intergalactic medium) about half of it is still missing. So not only is 85% of the matter in the universe made up of an unknown, invisible substance dubbed dark matter, we can’t even find … Read more 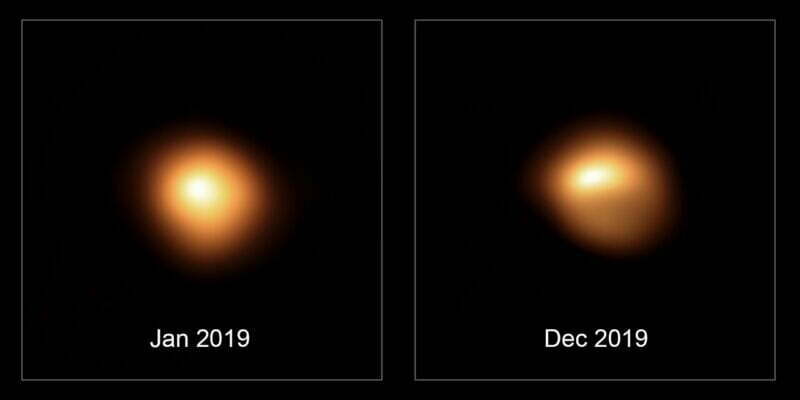 Betelgeuse is a red supergiant star roughly 700 light-years away from our own Solar System. Betelgeuse is usually the eleventh-brightest star in the night sky. After Rigel, the second brightest object in the constellation Orion, the rust-coloured star has attracted attention from astronomers for its relative closeness and potential for collapsing in a spectacular supernova event within the … Read more

You may never have heard of muons before, but these particles are crucial to our understanding of the universe. In a milestone study published in the journal Nature, researchers announced that they have overcome one of the biggest challenges to studying these fundamental particles. The study heralds a new era of research into the properties … Read more

Through the Artemis lunar exploration program. NASA is committed to landing astronauts, including the first woman and the next man, on the Moon by 2024. NASA will use innovative new technologies and systems to explore more of the Moon than ever before. NASA will collaborate with commercial and international Space Agency to establish sustainable missions … Read more

NASA-ESA Solar Orbiter is set to launch into space on Sunday, February, 9, 2020 at 11:03 p.m Eastern. And it packs ten powerful scientific instruments on board that will shed unprecedented light on our Sun. The mission is an ambitious collaboration between the European Space Agency and NASA. It aims to resolve some of … Read more

Neutron stars are created when giant stars die in supernovae and their cores collapse, with the protons and electrons essentially melting into each other to form neutrons. Neutron stars are city-size stellar objects with a mass about 1.4 times that of the sun. Born from the explosive death of another, larger stars, these tiny objects … Read more

The Neptune-sized planet, which orbits an Earth-sized star, is being slowly evaporated by the white dwarf, causing the planet to lose some 260 million tons of material every day. For the first time, astronomers have discovered evidence for a giant planet orbiting a tiny, dead white dwarf star. And, surprisingly, the Neptune-sized planet is more … Read more

For a long time, this was a purely theoretical question. Over the past decade or so, however, astronomers have found more than a dozen confirmed instances of “circumbinary planets”—that is, planets that orbit around a close double star. A particularly interesting case is the planet Kepler-1647b, which circles two roughly sunlike stars. This planet also … Read more

White holes are black ones in reverse, spewing out matter– and they could give us our first glimpse of the quantum source of space-time. In the textbooks, Gravitation and Cosmology, Nobel prizewinning physicist Steven Weinberg wrote that the existence of black holes “very hypothetical”, there is no [black hole] in the gravitational field of any … Read more

This star has been going nova every year, for millions of years. A nova star is like a vampire that siphons gas from its binary partner. As it does so, the gas is compressed and heated, and eventually, it explodes. The remnant gas shell from that explosion expands outward and is lit up by the … Read more

In pursuit of life everlasting, some turn to God. Others turn to science. Medicine is aimed at improving and extending healthy lives but it can’t stop the ultimate frontier DEATH. But with evolving technology, we might have a way around it in future. Until then what to do? Here comes in rescue Cryonics. Cryonics is … Read more

Brain ageing is inevitable to some extent, but not uniform; it affects everyone, or every brain, differently. Slowing down brain ageing or stopping it altogether would be the ultimate elixir to achieve eternal youth. Are there steps, we can take to reduce the rate of decline? At around 3 Kg in weight, the human brain … Read more

When inventor Frederick Banting discovered insulin in 1923, he refused to put his name on the patent. He felt it was unethical for a doctor to profit from a discovery that would save lives. Banting’s co-inventors, James Collip and Charles Best, sold the insulin patent to the University of Toronto for a mere $1. They … Read more

Gamma-ray bursts (GRBs) are the most powerful explosions in the cosmos. These explosive events last a fraction of a second to several minutes and emit the same amount of gamma rays as all the stars in the universe combined. Such extreme amounts of energy can only be released during catastrophic events like the death of … Read more