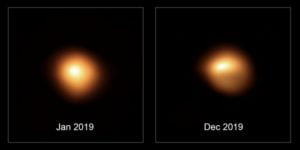 Betelgeuse is a red supergiant star roughly 700 light-years away from our own Solar System. Betelgeuse is usually the eleventh-brightest star in the night sky. After Rigel, the second brightest object in the constellation Orion, the rust-coloured star has attracted attention from astronomers for its relative closeness and potential for collapsing in a spectacular supernova event within the next 100,000 years.
While we all would love nothing better than to see a visible star go boom, the chances anybody living today will experience such a spectacle are slim. Very slim.
Estimates on its remaining lifetime depend largely on accurate measurements of its mass and rotation, which thanks to the scarcity of nearby companions to help judge its gravitational pull, have proven hard to pin down. Guesses of the star’s mass vary from 10 to 20 solar masses, with a size most likely around 11 to 12 times the mass of our own Sun.
Fortunately, Betelgeuse also happens to be big enough and close enough for astronomers to make out some details of its structure. This material is spread out over a vast distance in a blob that’s only roughly spherical in shape. If Betelgeuse was at the centre of our Solar System, its body would stretch out to brush the edges of Jupiter’s orbit. 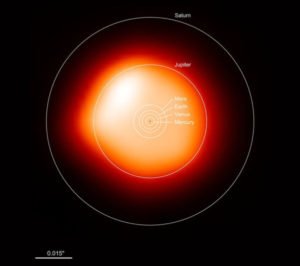 Being a mere 700 light-years away, the star’s end in a supernova explosion would be easily visible to the average sky-watcher with the naked eye. Its usual visual magnitude (a measure of how bright something appears to us) varies from a relatively bright 0 to a slightly dimmer 1.3. For comparison, the highly reflective planet Venus is a touch below -4, with the Moon having an average of just under -13 apparent magnitude).
For unknown reasons, at the end of 2019 and the start of 2020, the brightness of the red supergiant dipped further than usual, to around 1.5. Should Betelgeuse collapse and go supernova, the released energy would see its brightness rival the Moon’s, all concentrated in a star-like point. Yet to be seen.