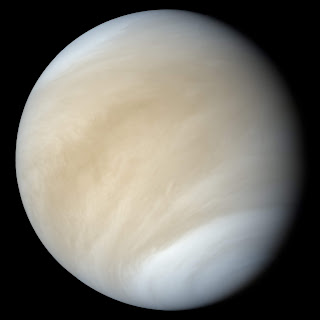 After studying the solar system for hundreds of years, you would think we, at least, have the basics figured out, stuff like why planets spin and orbit the way they do. Except, we totally don’t. And you only have to look at the planet next door to see it.
When scientists began observing Venus in detail in the 1950s and ‘60s, they expected it to be pretty unremarkable. Instead, it turned out to mostly be an inferno of acid rain, one that, of all things, spins backwards! It’s been more than 50 years since then and while we know a lot more about Venus’s climate, we still aren’t totally sure why it’s rotating the wrong way. But we at least have some ideas.
In astronomy, a backwards spin is called retrograde rotation and “backwards” is defined relatively. Because the solar system formed from one cloud of spinning gas, the planets all orbit in the same direction: counterclockwise, if you are looking down on the Earth’s north pole. They also rotate on their axes the same way they orbit, so also counterclockwise. Except for Venus and Uranus. Uranus sits sideways on its axis, probably thanks to a couple of collisions. Venus, meanwhile, rotates clockwise, and it is much less clear why!
One of the earliest hypotheses was that Venus may have been hit so hard by an asteroid that it reversed direction. The hypothesis seems to have been thrown out there in 1965 by two scientists who worked with the original radar data. And when I say, “thrown out there,” I mean it. They followed up the suggestion by saying, and I quote, “The possibilities are limited mainly by one’s imagination; supporting evidence is rather harder to come by.” Which is super convincing.
Either way, when you math it out, the idea kinda falls apart. It turns out that anything big enough to reverse Venus’s rotation would also destroy the planet. The impactor’s kinetic energy would be some 10,000 times too high. So, the impact idea was pretty much shelved.
Thankfully, it was replaced by a few actual evidence-based hypotheses. One of the leading one, proposed around 1970, is that Venus spins the same way it always has. Just at some point, it got turned upside down! This could have happened because of processes within Venus’s interior and atmosphere.
Venus is differentiated, meaning that it has layers like the Earth does: a core, a mantle and a crust. As the planet rotates, the core and mantle can experience friction where they meet. Venus also has a really thick atmosphere, which, thanks to the Sun’s gravity and heat, experiences tides along with the rest of the planet. This hypothesis says that the core-mantle friction and those atmospheric tides could both put some torque on the planet and that instability could have flipped Venus over. Some models suggest this might work only if Venus formed with an initial tilt of about 90 degrees, but others show that it might work with less initial tilt.
Either way, the idea is pretty weird and thinking about an entire planet flipping is kind of mind-boggling. But we have other ideas, too. Another one, first suggested in 1964, is that Venus may have gradually slowed down and then reversed direction. This could’ve been triggered by a few things, including interactions with the Sun’s magnetic field or those atmospheric tides or a combination of both. Venus’s atmosphere would have been the first part of the planet to start rotating retrograde after that spin-down. Then, that may have provided the rest of the force necessary to get the whole planet going backwards. As a bonus, this idea would also explain why Venus’s days are so long.
But there is no clear winner between these two hypotheses yet. To figure out which idea is most likely, we have to know more about Venus’s early dynamics, specifically its rotation rate and axial tilt.
According to a 2001 paper published in Nature, the axis-flip mechanism is most likely if Venus had a rapid initial rotation rate. But if it rotated slower than once every four Earth days and had a relatively small tilt, like less than 70 degrees, then slowing down and reversing is the most probable mechanism. Unfortunately, it is kind of hard to get evidence about Venus from four billion years ago. So until we build a time machine or at least some really good models, the jury is out.
Of course, that is not the whole discussion, either. Because just to throw a wrench in things, that 1960s impact hypothesis is actually making a comeback. Or at least, a version of it. In 2008, one researcher suggested that Venus may have gotten its weird spin back when it was a planetesimal. They argue that billions of years ago, another object about the same size slammed into it and sent it spinning like a backward top. But instead of destroying baby Venus, those two pieces came together to form a full-sized planet.
Unlike in the ‘60s, there’s actually some potential evidence for this now. Based on Venus’s topography, we don’t think there’s a lot of water in the planet’s interior compared with Earth’s. And a huge impact could have provided the energy to get rid of it. This hypothesis would explain why Venus is so dry, but there are other competing models, too. Like, it’s possible Venus lost its water through evaporation instead.
To learn more, it would help to do a mineralogical survey of the planet to determine if there are any water-containing compounds there. If there are, it means Venus couldn’t have lost all its water so early in that big impact. But we haven’t done one of those yet, because Venus is a place where robots go to die. The good news is, it is arguably easier to build a Venus-resistant rover than a time machine. So hopefully we can get some evidence for at least one of those hypotheses soon.
Also Raed:- 5 Unsolved Mysteries About Our Solar System